The title of this blog is a quote my wife spontaneously shouted out, after we had left the club Sugar Factory. We were walking through Amsterdam for an hour and talked about food. The early Friday evening party “Full Spectrum” … Lees verder →

I think awesome Dutch dubstep from Yellowclaw and mr. Polska

Allright, it’s Fridaynight and I have too much energy left after the working week. My wife, her sister and one of my best friends (Peter bro) were getting crazy of me, Peter came over from the South (Limburg) to have some fun with us at the Amsterdam Dance Event.

Sweet friend Maudy
I was jumping throughout my house on nice techno from Michel de Hey! Apparently, my energy was contagious because after some minutes, everyone else in the house was screaming and dancing with me (lol). We had a lot of fun! In the meantime, a sweet friend (Maudy) of mine was Whatsapping me about a nice party that night on a boat called Pure-liner (Party: CR2 RECORDS LABEL SHOWCASE). I really was into that idea, but unfortunately Peter was too tired and my wife didn’t feel very well, so I decided to save my energy for Saturday’s party. On the morning after, I heared that Paris Hilton was on that party too, so I was actually happy that I didn’t go, although Maudy had a stunning time!

Azijnfabriek
We just came back too early (03:00). The drum & bass party we went to was on a really nice underground location: Ot301 (an old school), which reminded me to a club listening to the name: “De Azijnfabriek” in Roermond and the Reactor techno parties I attended. The drinks where unlikely cheap so we bought some Fritz kola and a few bottles of water. 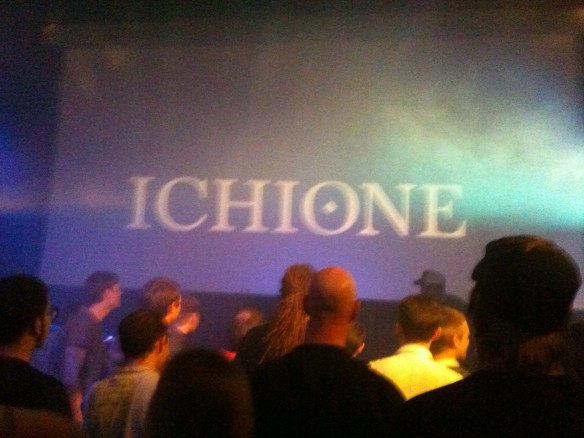 Live on drums
The “Ichione” party started with an awesome performance from Macc (Live Drums). It wasn’t the high danceable fast beat drum&bass that we came for, but for someone who can play the beats live on Drums, I only can have a lot of admiration. After this set, DJ Trax & Nucleus started up theire rhythms. After a few tracks, I had my opinion ready! They where horrible. The artists didn’t work together and mixed all kinds of drum&bass and hiphop styles together. They didn’t build up to a climax. All of us (I Chu, Peter, Dominique and I) agreed that it was terrible. The host: Quest One MC UK (IChiOne, GB), the visuals: Christopher V. Gabriel (A – Studio, NO), and the crowd where high quality however! Loved them.

‘Crate-of-beer’ electro
Before this anti-climax, we went to the Sugar Factory for some ‘crate-of-beer electro’ (dubstep, electro, HipHop) of Eskmo. The guy gave an awesome and freaky performance on crazy and dreamy visuals. He hit on crates of beer, bowls, clothes hanger and he tore some paper in the microphone. He looped these sounds into his set. It wasn’t really danceable, but the quality was really good! A few minutes before the end, the speakers were actually ‘blown up’ and we left to the next experience…it was an interesting night at the Amsterdam Dance Event.